Author of Guerrilla Marketing for Job Hunters, Hiring Greatness and the forthcoming Executive Recruiting for Dummies, David Perry had an unusual start—both as a recruiter and in life.

The son of an officer in the Royal Canadian Navy, David was born in Quebec City. with heart complications that should have ended his life before it started. But against all odds he survived, developing a doggedly optimistic strength along the way. And although David’s keen understanding of both business and people was obvious from an early age, it wasn’t until a few years into a career as a manager for Consumers Distributing that he accidentally stumbled into his first search.

It was the beginning of an empire. As managing partner for Perry-Martel International, David has billed 60,000 hours during 30 years of executive searches that have generated more than $300M in negotiated salaries.

That first search, years ago, set the tone for a career and business that could politely be described as unconventional. Stepping into a new role as general manager at the former Consumers Distributing, David was brought in to deal with ongoing management and labor issues. It wasn’t long before under-performing staff threatened to quit their jobs collectively, so David replaced them all, recruiting an entire team he’d been scouting from a nearby McDonald’s. After noticing their seamless teamwork during one of his lunch breaks, he had scouted them for weeks before approaching each one individually. And when the day came, he ended up firing and hiring 25 people in one shot. The store hit its largest profit ever the next quarter.

David eventually decided to pursue recruiting full-time after several successful searches, making his own rules along the way. Not afraid to get his hands ‘dirty’, he was eventually nicknamed “The Rogue Recruiter”  by the Wall Street Journal for his unusual but effective tactics.

Coming from a family that constantly moved across North America, as a young man David quickly developed a knack for reading and understanding people. It was this innate ability to size others up that pushed him to the top of the recruiting business. Knowing what people are good at, and placing them in the right opportunities, was “always easy for me,” he says. “I didn’t have to think about it – it was just something I could do. And then when I realized I could be paid for it, well, I’ve never looked back.”

David parlayed that ability into a business with a 99.97% closing rate, and a 100% guarantee; if things don’t work out, he replaces the candidate at his own cost. He understood at an early age that people are at their happiest and most effective when they feel valued, and that a recruiter can get anyone there by playing to their strengths. It’s a philosophy that’s at the core of his business, and one that has inspired several books along the way.

In 1999, with the dot-com economy balanced on the precipice, Nortel Networks Corp. announced the eventual layoffs of 8,000 employees. Considering the company’s importance to the local economy at the time, tensions in Western Quebec soon reached an unbearable pitch—things got so bad, David returned from vacation to find more than 800 of the 8,000 jobless, former Nortel employees lined up outside his office. He knew he’d never be able to help all of them. He was a recruiter, after all, not a job agency. But as he set to work developing a reading list to help them find work, what he found instead was lots of useless information and an overwhelming sense of dread as he realized that what was available wasn’t good enough.

So he wrote a book that he eventually sold online, funneling the money to, The Western Quebec Education Foundation, which he and his father originally funded to raise money to help build English speaking schools in Quebec. He soon contacted Jay Conrad Levinson of the Guerrilla Marketing Empire, and several months later they were working together on their first book. This would eventually lead to several editions of Guerrilla Marketing for Job Hunters, along with a job hunting boot camp which has inspired the upcoming “Put America Back to Work” campaign. He’d transformed from solely recruiting to coaching, but in the end it all came back to people: he understood what employers were looking for, and how employees could meet their needs. He just started to teach people to do it for themselves.

Father of four and husband to one, David lives in Western Quebec while operating his boutique executive search firm in Ottawa. After graduating from McGill University with a double major in economics and industrial relations, David was once a Captain in the Canadian Reserves tasked with planning and conducting an Arctic Indoctrination Course above the Arctic Circle in 1981. Far from the Arctic these days, on his lunch breaks you can find him at the local Chapters Starbucks on Ottawa’s Rideau Street, enjoying what he’s cheekily dubbed the “Canadiano”.

David is a recruiter, job coach, author and sought after business and career motivational speaker. And as he puts it, businesses are operating at a time where the competition for exceptional talent is so high, they can’t afford to get things wrong. So he teaches companies not only how to hire the right people (and keep them), but also candidates on how to make business decisions that will shape their careers. When asked how he does it, he says there’s never a set plan—and there shouldn’t be. It’s all about having a goal but being open to change course and incorporate new opportunities, which he says leads to the best results and, ultimately, success. He’s currently finishing off the final chapters of his next book, Executive Recruiting for Dummies, while preparing to speak at TEDx and The New World of Work Conference in Romania.  That sword on his shoulder is the one he won as the Top Officer Candidate when he graduated reserve officer training in 1980.

More on recruiting, recruiters and building a career that lasts can be found through his videos and tutorials online. 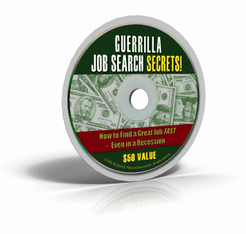 Grab your Free CD of our recession-proof Guerrilla Job Search tips ($50 value). Plus, get $200 in Extra Resources if you bought the book. Supplies are limited. Click here now!